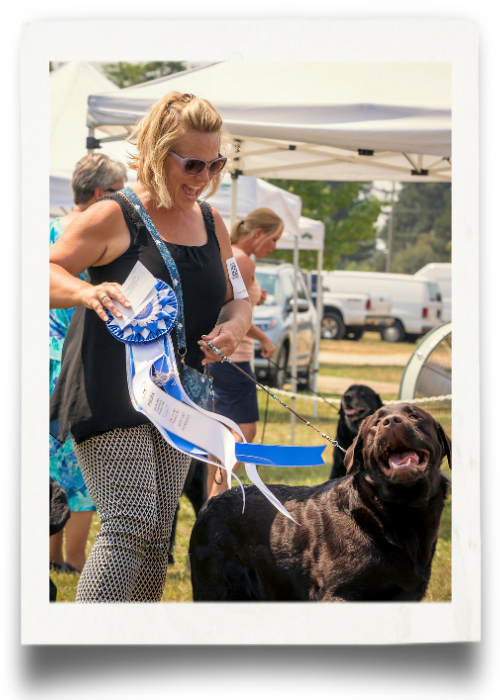 What are Field Events?

Per the AKC, “’Conformation’ is the official name for ‘dog shows.’ While they may seem glamorous, the true purpose of conformation showing is to evaluate breeding stock. The dog’s conformation, his overall appearance and structure, is an indication of the dog’s ability to produce quality purebred puppies, and that is what is being judged in the ring. That’s why mixed-breeds and spayed or neutered purebreds are not eligible to compete.

Many times a new exhibitor will get started in dog shows by finding a mentor, usually the breeder from whom they acquired their puppy. Many AKC clubs also offer handling classes to teach owners how to present their purebred dog to a judge at a dog show.” Wikipedia describes a conformation show, also referred to as a breed show, as a “kind of dog show in which a judge familiar with a specific dog breed evaluates individual purebred dogs for how well the dogs conform (hence the term “conformation”) to the established breed type for their breed, as described in a breed’s individual breed standard.  Such shows are useful to breeders as a means of evaluating dogs for breeding purposes.

A conformation championship from a recognized national kennel club is generally considered a reasonably objective indication of merit, as it indicates that the dog has been found to be a superior example of its breed by some number of different judges on some number of separate occasions. Many breeders even consider a championship a prerequisite for breeding. A conformation dog show is not a comparison of one dog to another but a comparison of each dog to a judge’s mental image of the ideal breed type as outlined in the individual breed’s breed standard. Dog show judges attempt to identify dogs that epitomize the published standards for each breed. This can be challenging, because some judgments must necessarily be subjective. As an example, what exactly entails a “full coat” or a “cheerful attitude”, descriptions found in breed standards, can only be learned through experience with the breed that has that particular requirement. Judges are generally certified to judge one or several breeds, usually in the same group, but a few “all-breed” judges have the training and experience to judge large numbers of breeds.”

Explanation Of All-Breed & Specialty Shows (from the AKC)

All-Breed shows are conformation events that are held for the more than 190 breeds and varieties of dogs recognized by the AKC to compete in, unless otherwise noted on the club’s premium list. Also listed under All-Breed are the Group Shows, or shows limited to one of the seven AKC Groups: Sporting, Hound, Working, Terrier, Toy, Non-Sporting and Herding. Approximately 1,500 AKC All-breed conformation point shows are held throughout the United States each year.

Specialty shows are events limited to a single breed, e.g. Bulldogs, or the varieties of one breed like Poodles, which include the three varieties: Toy, Miniature and Standard. Some specialty shows may be held in conjunction with an All-Breed event while others are stand-alone events. There are about 2,000 independent national, regional and local specialty point shows held every year. There is no better place to learn about your breed than at a Specialty Show, in particular the national specialty (“the National”), which is usually held annually by the breed’s national parent club. It’s where dedicated fans of the breed meet together year after year, sharing their knowledge and passion and bringing their best dogs to compete. As with any dog show, the point of the conformation classes is determination of the best breeding stock to continue the breed—and this point is taken nowhere more seriously than at specialties and particularly at the National.

A class win at the national can be a high point of a dog person’s year, and a Best of Breed or Best in Sweepstakes is often a pinnacle achievement for person with a long history in a breed. Whether you’re a prospective owner researching a breed, a new owner, or an experienced breeder, handler or judge, Specialty Shows are your best opportunity to spend time with others who share your love of your breed. Many provide educational seminars and may offer other events such as obedience, tracking, and agility, as well as breed-specific performance venues such as Earthdog or field trials, herding tests and trials, lure coursing or draft tests. There are many specialties across the country every year. PSLRA holds its annual specialty in August of each year.

A non-regular class, usually offered at specialty shows, which are specifically designed to recognize outstanding young dogs and puppies, as well as veteran dogs.  Winners of Best in Sweeps, Best Opposite Sex in Sweeps, and often all of the class placement winners, receive a portion of the entry fees as prizes for their placement.   Puppies must be under 18 months old to be eligible for Sweepstakes competition and Veterans must be 7 years or older (8 years or older at the National Specialty).   The judge for sweepstakes is usually a different judge than the regular class judge(s). 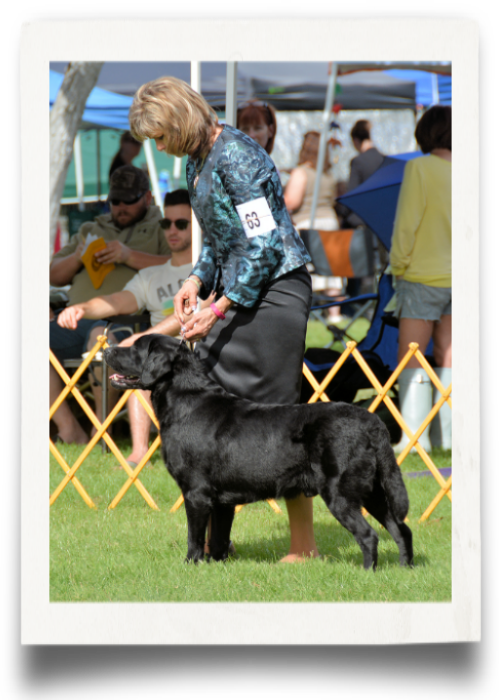 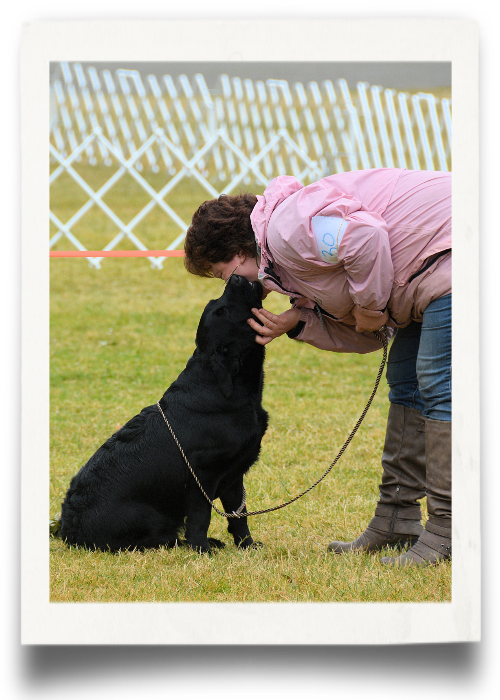 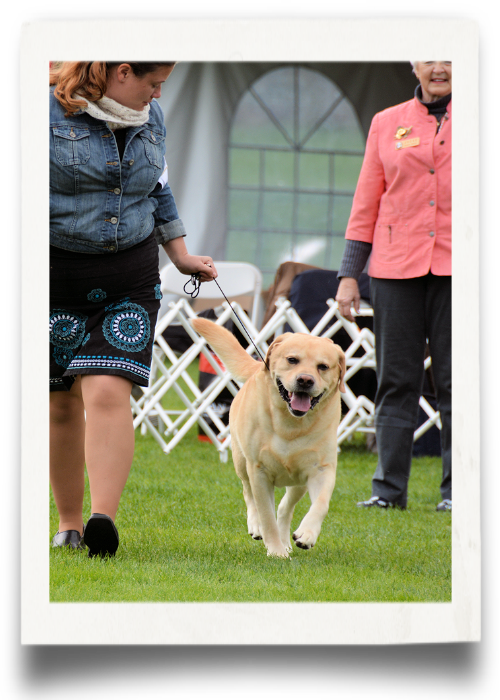 What is a Match?

“AKC Match Shows are a great opportunity to socialize your dog in an informal and educational dog show environment, all while meeting other dog lovers who are already part of the AKC community. Most of all, it’s pure fun! Get started with your dog now:

Match Shows provide people who are new to, or interested in getting involved in, Conformation, Obedience, Rally, or Agility events (depending upon the club).  These Events are often used as practice for puppies and their owners, providing guidance and feedback from seasoned handlers, judges or fellow newbies. Match Shows are as enjoyable to watch as they are to participate in! If you are a first time participant you could easily come and observe with or without your dog. If you are coming to participate then you may need your dog’s registration information to enter. The other benefits AKC matches offer is that you are meeting other people that are trying to learn about their dog and the various sports that the AKC has to offer. At the end of the day there is no wrong question to ask. Matches are an excellent point of public education for the new participant, but most important giving you and your dog a relaxing fun no pressure environment to come and learn.

Is an informal event at which neither Championship points nor credit toward an Agility, Rally, Obedience, or Tracking title are awarded. They are events at which dog clubs, judges, stewards, and exhibitors and their dogs gain experience needed for licensed events.  No dog that is a champion of record may be entered in a conformation match (except that champions may be entered in any junior showmanship classes). All of the Rules Applying to Dog Shows, and the Agility, Tracking, and Obedience/ Rally Regulations will apply to sanctioned matches, except those which specifically make reference to licensed and member events and except where otherwise stated in the Regulations.”

There are nine basic types of sanctioned matches:

An informal dog event that is not approved by The American Kennel Club as a sanctioned match. These events are commonly held by clubs that are not on the records of The American Kennel Club as being eligible to conduct sanctioned matches, dog shows, agility or obedience/ rally trials. Fun matches are designed to provide handlers and dogs with an opportunity to practice in an environment that simulates a trial.  Training in the ring is usually encouraged.  Bring lots of treats and toys and reward accordingly. Remember, fun matches are supposed to be just that, FUN!

What is a Conformation Certificate?  (CC)

The Conformation Certificate offered by the Labrador Retriever Club, Inc. is a non-competitive conformation evaluation program open to all Labrador Retrievers, including spayed and neutered dogs. Labradors will be judged in accordance with the Standard and it is hoped that exposure to such evaluations will help to promote an awareness of desirable Labrador Retriever breed type. The evaluation should demonstrate that a dog possesses the basic attributes of a Labrador Retriever. The Evaluation Sheet contains nine (9) conformation and temperament categories for a judge to consider on a numerical basis.  Each dog will be scored in each category using a one (1) through three (3) point system, e.g., 1 = Poor, 2 = Acceptable and 3 = Good. To receive a Conformation Certificate a dog is required to have a total score of eighteen (18) or better and demonstrate in the mind of the judge a sixty-five (65) percent likelihood of conforming to the characteristic as described in the Standard. To assist in determining if a dog is worthy of receiving a CC, a judge should consider the following: