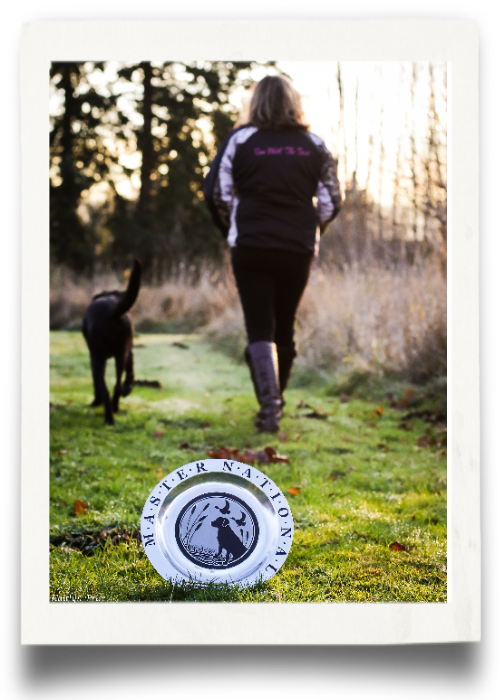 A hunt test is an event at which the natural ability and training of gun dogs are evaluated against a written standard.  Each dog that meets this standard earns a pass. This is unlike a field trial in which dog/handler teams compete against one another with only one dog being declared the winner.

In the 1980s hunters with good retrievers, but without the resources, or time, to be able to be competitive in field trials were anxious to have an avenue to test their dogs for hunting abilities. The Qualifying and then Hunting Dog stake at field trials satisfied that need for a while, but did not offer titles. Thus something more was desired.

The North American Hunting Retriever Association (NAHRA) was formed to satisfy this need. AKC and NAHRA worked together for a while developing a joint hunting test for retrievers. After a time AKC and NAHRA went their separate ways. At this point AKC began it’s own Hunting Test for Retrievers program with titles offered for Junior Hunter, Senior Hunter and Master Hunter.

The first Retriever Hunting Test Sub-Committee was composed of eight individuals from around the country. Later it was changed to consist of four individuals, one from each region, and a Chairperson. Nelson Sills also serves as an advisor to the Sub-Committee.

The first AKC licensed retriever hunting tests were held in 1985. That first year, there were 13 events with a total of 681 entrants, compared to 2005 in which there were 341events, and 34,799 entries. The distinction of the first events belongs to the Jayhawk Retriever Club of St. Joseph, KS and the East Texas Retriever Club of Lufkin, TX, which ran on the same dates. As you can see from this, the program has been a rousing success. In fact its success is the largest problem the program faces. Large entries call for more workers and judges, and make it hard on smaller clubs.

Owners, who had titled their dogs as Master Hunters, soon desired something else to strive to achieve. Mr. Nelson Sills urged the AKC to investigate the possibility of instigating an event to give Master Hunters something else to strive toward. On advice from Mr. Sills, Bob McKowen and John Carroll, established the first Master National Hunting Test for Retrievers, after a survey of AKC clubs indicated that the majority of respondents favored such an event.

The first Master National Hunting Test for Retrievers was held in Chesapeake City, MD on September 15, 1991 with 94 entries. Twenty-six dogs qualified at the event chaired by Larry Wharton and mainly staffed by volunteers from local clubs. At this first Master National, the Master National Retriever Club was formed with representatives from 59 clubs attending. Bill Speck was elected to serve as the first President of the club. A vice president and director were elected from each of the four regions, and Linda Furr was elected to serve as Secretary/Treasurer. It was voted that the Master National would rotate among the four regions of the United States.  [Learn More]

The Retriever Field Trial sport of today can trace its origin to the late 1920’s to early 1930’s when a small group of avid hunters devised a sport in which they could evaluate the performance of their hunting retrievers in a competitive environment and obtain Championships along with bragging rights. Today’s modern Retriever Field Trial is a much evolved event with some of the best trained, highly skilled, and well conditioned competitors in the Sporting Group.

In the early days of the sport most marked retrieves and blinds rarely exceeded 100 yards in distance, by comparison today’s events often see multiple marked retrieves in excess of 250 yards and blind retrieves sometimes in excess of 300 yards. Today’s competitive All-Age Retriever must be in both excellent physical and mental condition, test in these trials almost always involve multiple marking test consisting of double, triple and quadruple marks with one, or several gun stations retired from the dogs sight, also single and multiple blinds are often involved.

Most weekend retriever events are comprised of four events, two are major all-age events that carry championship points, and the other two are minor stakes for younger dogs. One of the following, open to professional trainers and amateur trainers, is offered, Open All-Age, Limited All-Age, Special All-Age, or Restricted All-Age, the determination as to which is offered is based on the entries at the clubs previous event. The other major stake, offered to Amateur handlers only, is Amateur All-Age, or Owner/Handler Amateur All-Age.  At the previously mentioned stakes championship points are awarded, the awarding of these points count toward a dogs Field Champion and Amateur Field Champion status. Also on a yearly basis these points count toward qualification to participate in both the National Open Retriever Championship and National Amateur Field Championship, each held once yearly. Generally two minor stakes are also offered, one being the Qualifying, this stake is very similar to an all-age stake but generally not as difficult in content. The other minor stake, a Derby, is for young dogs that are at least 6 months but have not reached 2 years of age, this stake involved marked retrieves only, these may consist of single, double are triple. Points are awarded for placement in this stake and count toward a yearly Derby Championship sponsored by the Retriever Field Trial News, a publication owned by the Retriever National Open and Amateur clubs. 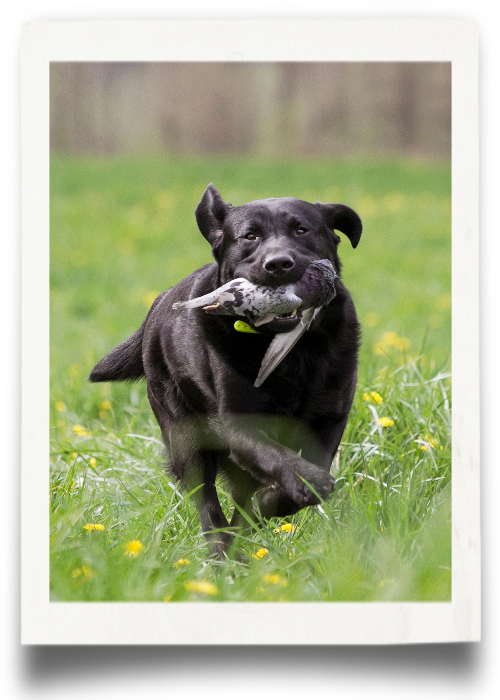 The Working Certificate is a parent club (Labrador Retriever Club, Inc.) program and the title, while recognized by the LRC, is not an AKC recognized title.  Per the LRC,

“When LRC, Inc. was founded in 1931, the members intended the Working Certificate program to parallel The Kennel Club in England’s requirements that a Sporting dog pass a working test before earning its conformation title. The American Kennel Club does not require working aptitude evaluation for Sporting Dogs who earn their conformation titles. “

While the AKC does not require that a dog earn a working title to be called a Champion, the LRC states “No member of the Club shall use the “CH” in front of the name of a registered Labrador Retriever dog until said dog, having won a conformation championship, shall also receive a working certificate or the equivalent.”  To that end,

“The Working Certificate program provides a way for Labrador owners to experience and develop an appreciation for the natural working abilities of their dogs without the lengthy and expensive commitment the competitive performance events require.”

Unlike most performance events, the test must only be passed once to earn the WC title.  It is meant to be a test of natural retrieving instinct and is not meant to indicate the extent of training a dog has received.  That said, basic obedience is helpful.  The test requirements (from the LRC Web Site) are as follows:

In addition, local breed clubs may offer advanced versions of the WC, such as an AWC (Advanced Working Certificate) or WCX (Working Certificate Excellent).  These are considered club titles as the requirements for each designation vary from club to club.

Local Labrador breed clubs that hold annual Working Certificate Tests are the Puget Sound Labrador Retriever Association and the Rose City Labrador Retriever Club.  In addition, other local retriever breed clubs (for instance, the local Golden Retriever, Flat Coat Retriever and Irish Water Spaniel Clubs) often hold annual WC’s for their breeds.  Their test requirements are typically more difficult than the LRC WC requirements, so it may be possible to coordinate with those clubs to allow your dog to run in their test (and either run their test scenario or have them alter the scenario for your dog) provided the arrangements are made in accordance with LRC policy.

What is a CKC WC (Working Certificate)?

Because our club has Canadian members and many of our American members enjoy participating in CKC events, it is beneficial to describe the CKC program as well.

Unlike the LRC, Inc. WC program, the CKC WC is an official Canadian Kennel Club title and is added to the dog’s registered name once earned.  Like the LRC. Inc. WC Program, only one pass is necessary to earn a title at each level.  There are three levels of official working certificate titles that may be earned (they must be passed in succession, i.e., one must start at the WC level as it is a pre-requisite for the next level):

“The primary objective of the Working Certificate Tests are to encourage the development and use of those natural abilities for which retrievers were originally bred.

The tests provide a means to help encourage retriever owners to develop their dogs’ natural abilities, and to have proficient hunting partners.

The tests are non-competitive and those dogs that pass the tests to the satisfaction of the judges will be recorded as having basic working ability.”

There are several clubs close to the U.S. border in British Columbia that hold an annual WC/I/X test.  One can find events offered on the “Schedule of Events” page at www.bcretrievernews.ca.  This page is updated throughout the year and links to premiums will be provided when available.  U.S. dogs wishing to enter must either be registered with the CKC or have an Event Registration Number (ERN).  The ERN can be used for any CKC event.  The application for an ERN can be obtained on the Canadian Kennel Club Website here: Canadian Kennel Club